Are SUVs Safer Than Cars? When shopping for a new car, there’s a lot to consider. Many customers look at fuel economy, optional safety features, and overall car price. Generally, a smaller car will have better gas mileage, partially because it’s made out of lightweight materials and partially because it has a smaller engine. But here’s another thing to consider: do smaller cars perform better in crash test ratings compared to other vehicles, namely SUVs? This may bring you to another question: are SUVs safer than cars? Below, the personal injury attorneys at Janicek Law analyze the most recent data available about vehicle fatalities in order to answer that question.

The legal team at Janicek Law in San Antonio, TX is passionate about defending the rights of those injured in motor vehicle accidents. If you or someone you love has suffered major damages from an automobile accident that wasn’t your fault, call us today at 210-366-4949 to schedule a free consultation.

How Many Car Accident Deaths Happen Every Year in the U.S.?

According to the National Highway Traffic Safety Administration (NHTSA), nearly 43,000 Americans died in car accidents in 2021 alone. The NHTSA estimates that these driver death rates represent a 10.5% increase in car accident deaths from 2020. Additionally, the fatal crashes in 2021 represent the highest number of driver deaths on the roads since 2005.

The answer to this question depends on many factors, especially vehicle type and size. The Insurance Institute for Highway Safety (IIHS) states that heavier, larger vehicles are generally safer than lighter, smaller vehicles in an automobile accident. That’s because the very front of a vehicle – the distance from the end of the hood to the driver – absorbs the full blow during a head-on car accident. Large cars tend to have far larger front ends than smaller cars. Therefore, drivers in small, passenger cars have a higher risk of sustaining serious injuries, especially in head on crashes.

The IIHS also explains that heavier cars tend to keep moving during car accidents, which results in passengers suffering from less force. Lighter vehicles tend to stop and crumple quickly during a crash, especially when they’re crashing into a heavy car. This causes passengers in small cars to absorb a lot of force during an accident. Generally speaking, the more force a car driver suffers during an accident, the greater their injuries will be.

If you have suffered any of the aforementioned serious injuries in an automobile accident that wasn’t your fault, you may have grounds to file a claim and receive significant compensation. A San Antonio personal injury attorney at Janicek Law can carefully review the details of your case and help you determine the best course of action. We offer a free consultation to all new clients. 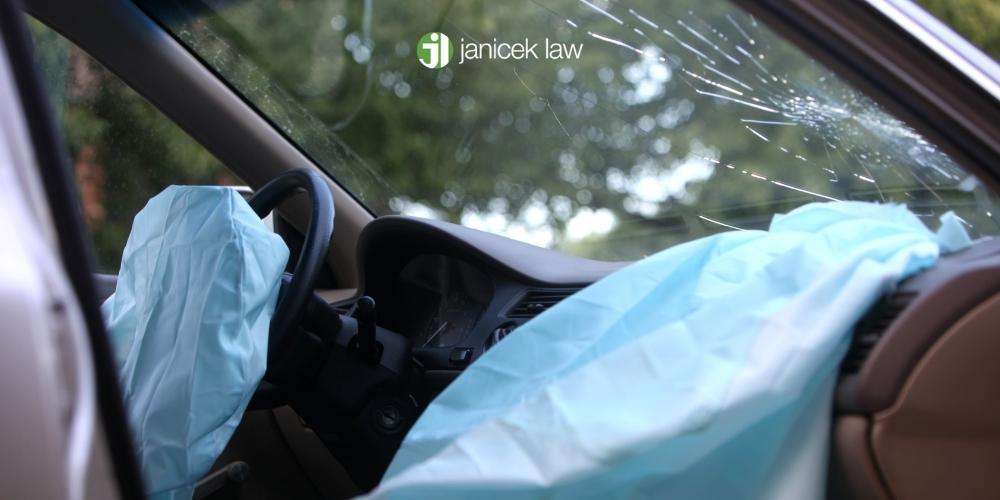 What is an SUV?

For those who aren’t very car-savvy, an SUV is a Sport Utility Vehicle. SUVs have a combination of elements from passenger cars and off-road vehicles. The most common characteristic that most SUVs have is four wheel drive. According to data from the International Energy Agency (IEA), SUVs were some of the most popular cars worldwide in 2010-2021, accounting for nearly 46% of the world’s passenger car market.

Are SUVs Safer Than Cars?

Because SUVs are larger, heavier cars compared to compact cars – such as Sedans for example – they are generally considered safer, especially in head-on accidents according to Consumer Reports. A 2013 report from NBC News even claims that SUV drivers are 50% more likely to survive a crash than drivers in regular cars.

But there are so many more factors to consider than just vehicle size and weight. Many times, the type of crash factors into vehicle safety.

The data also shows that compared to a sedan passenger, an SUV driver or a truck driver is less likely to survive a rollover crash involving a single vehicle. Meanwhile, the data shows that the rollover fatality risk for large vehicle drivers and small vehicle drivers is equal in multi-vehicle crashes.

Yes, generally speaking, SUVs tend to be safer than compact cars due to their size and weight. But size and weight can create a lot of safety flaws as well. Not only do larger vehicles have a higher risk of rolling over, they also have bigger blindspots. Big blindspots can lead to more SUV accidents and more pedestrian accidents. In fact, a 2022 study from Consumer Reports claims that large cars are more likely to injure or kill pedestrians when making left turns compared to small cars. Researchers theorize that this is because drivers in SUVs and pickup trucks have larger blindspots.

Additionally, a truck or SUV driver may have a higher sense of security simply due to the size of their car. This sense of security can certainly influence driver behavior, causing them to take more risks at high speeds on the roads.

So with all this information in mind, you may be thinking: what are the best safety features to look for when I’m car shopping?

You definitely want to make sure your car has safety considerations like anti-lock brakes, automatic braking, electronic stability control (ESC), traction control system, and frontal and curtain airbags. Blind spot detection also creates some of the safest midsize and large vehicles on the market. Lastly, you want to look at crash test ratings and car safety tests from Consumer Reports. Tests like these will analyze a specific car’s accident avoidance and wet and dry braking.

It’s important to remember, though, that the safety standards of most cars are nothing without safe driving practices. Make sure to always wear seat belts, drive sober, and drive without distractions. If you don’t, you’re basically flirting with a higher mortality risk in a car accident.

Popular models of SUVs and trucks have some of the best safety features on the market. But even still, many people wonder: are SUVs safer than cars? Recent traffic fatality data from SUV accidents, truck accidents, and sedan accidents seems to say yes. That’s why it’s so important to keep vehicle type, size, and weight in mind when car shopping.

If you or someone you love has suffered a personal injury, a catastrophic injury, or a wrongful death due to a car accident that’s not your fault, you may have grounds to take legal action. For more information, call San Antonio’s top car accident attorneys at 210-366-4949 today. We offer a free case evaluation to all new clients.